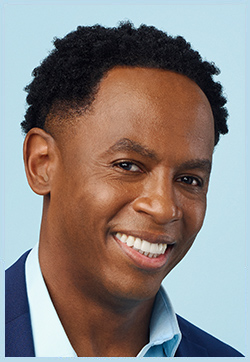 Dr. Adolph Brown, affectionately known by his audiences and clients as “Doc Brown,” is one of America’s most trusted parenting experts. He is a clinical psychologist, a former tenured full professor, and master teacher. For over three decades he has helped millions of families with his four books and his hilarious yet insightful master classes.

Doc Brown is currently co-host of the hit ABC series The Parent Test on ABC with Ali Wentworth. Based on a hit Australian television format, “The Parent Test” explores the many distinctively different parenting styles. From helicopter to child-led parents, 12 families are put under the microscope in the ultimate parenting stress test and will share learnings about emotional hot-button topics that compare the multiple styles of parenting.

As a much sought-after and highly effective Unconscious Bias, Equity, Diversity and Inclusion keynote speaker, Dr. Brown skillfully addresses the impact of stereotypes. He credits much of his success to the luxury of humble beginnings of being reared by a single parent mother in abject poverty of the inner city housing projects infested with gangs, drugs and violence.

As a Master Teacher, Dr. Brown is in the top 1% of world-class scholar teachers and is recognized as one of the top 10 most influential thought leaders in America. Dr. Brown is the author of acclaimed books, including the international mental wellness best seller, Two Backpacks. Other best sellers authored by Dr. Brown includes a business soft skills classic – Championship Habits; and the education classic – Real Talk.

Being reared by a single parent mother in the housing projects and having his oldest sibling and only brother murdered when he was only 11 years old, Adolph experienced many adverse childhood experiences.  Although Dr. Brown was reared in the urban housing projects, many of his greatest life lessons occurred while spending summers in rural Virginia on his grandparent’s farm.

Dr. Brown earned his undergraduate degrees in anthropology and psychology with a minor in education, master’s degree work in special education and experimental psychology, and a doctorate degree in clinical psychology. Before joining the psychology/education faculty at Hampton University, Dr. Brown became one of the initial major investigators of “The School To Prison Pipeline” paradigm and received the First Annual Francine Kee Peterson Memorial Scholarship for Social Justice Advocacy from his role model, social activist Geoffrey Canada. While at Hampton University, Dr. Brown was selected to be a “Scholar in Residence” at NYU, nationally awarded “Service-Learning Fellow,” and earned the highest distinction given by the President, Provost and Board of Trustees of the prestigious “E.L. Hamm Master Teacher Award for Distinguished Teaching.” Dr. Brown was appointed chairperson of his department, promoted as a tenured full professor and was also the dean of the graduate college. He continues to be a business, community and educational leader whilst being a generous philanthropist and a continuous learner.

Dr. Brown believes his 3 greatest accomplishments are: being the husband of Marla, father of 8 kind-hearted children, and granddad of Aiden and Hazel.